An Evening with Neil deGrasse Tyson

Ticket in hand, I strolled into Atlanta’s Fox Theater at 6:50PM.

I felt at ease within moments. Hundreds of people milled around me, buzzing about the event. In the lounge, cocktails swirled (mine was a slender glass of champagne) while patrons talked, laughed, and wondered aloud what the evening would hold.

Because you see…not one guest among us knew just what the coming performance would be like.

Would Neil’s performance be straight-laced science served with a few laughs?

Would it be comedic…maybe light-hearted?

The marquee gave us only this: 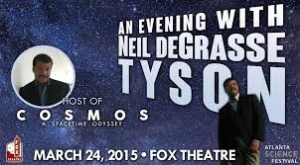 …which left a lot to our imaginations.

Before I say another word, a disclaimer: I love science. Hard. Not so much the formulas and intrinsic mathematics, but the raw, powerful stories told by chemistry, physics, quantum mechanics, and even more so the fascinating behind-the-curtain stuff of space, dark matter, and stars. In my heart, I knew whatever approach Neil took would hold me enraptured. If he wanted to go with hard, hard science (which some part of me hoped for) I’d have been all in. If he wanted to quick-hit us with approachable topics using his wit and humor, I’d have loved it. Neil’s the type of human being I’d like to sit in the back of a classroom lecture and just listen to. For me, it just doesn’t get much better than an astrophysicist with the ability to slap me in the face with hard, fun scientific truths.

And so we began…

Taking my seat next to my date for the evening (a science enthusiast herself) I glugged the last of my champagne and settled in. The couple to my left was a quiet, older pair. It’s true; I worried the folks in front of me would stay on their cell phones all evening, but an usher wandered over to insist they put their infernal devices away. In our upper balcony seats, we sat back as the lights dimmed and astrophysicist Neil deGrasse Tyson walked onto the stage. The audience roared. It seemed to stun him more than a little.

For those who haven’t seen Neil speak or have never caught a viewing of Cosmos: A Spacetime Odyssey, there’s a style to his approach that just says ‘friendly.’ Now maybe that’s not what he’s really like in real life. But when he sauntered onto the stage, his body language told me what everyone in the crowd already sensed: This dude is relaxed. We’re gonna have fun. And we’re about to get scienced, just like in The Martian.

Turns out The Martian was dead-on. The night’s theme was: An Evening at the Movies with an Astrophysicist.

Standing beside a massive projector over which he had slides, videos, and movie clips, Neil’s plan was to take the audience on a scientific voyage through the last 30 years of movies and tv shows.

Ok. I promise. I won’t spoil every last secret in case you’re planning on seeing his show. But I will say these:

He led with beer commercials. Yes, that’s right. Beer. Commercials. Turns out Neil really, really enjoys seeing science (and especially astrophysics) applied in popular culture. Did he show us a Corona commercial in which a beach party moves from sunlight to moonlight? You bet. And did it turn out this commercial was dead-on scientifically accurate in the way sunsets and full moons work in the tropics? Damn straight it did. Did Neil give us a ridiculous French commercial (with a ridiculously beautiful woman) in which she quenches the Sun with a single drop of Perrier? Yep. And did he make sure to mention that the moment she took her helmet off while in space her head would vaporize? Hell yes.

Aaaaaand…you know that movie Contact? Yeah, the cool one with Jodie Foster and the giant, wormhole-making machine. Remember that one? He touched on it. Big time. Specifically the scene in which Jodie talks about, “If our galaxy has 400-billion stars and only one in a million star systems has a planet, only one in a million of those planets has life, and only one in a million of those has intelligent life, that still means there’s literally millions of civilizations out there.” In one breath, Neil had us thinking, “Ohhh cool, millions of other civilizations!” But in the next he does the math, like literally on the screen, and shows us how Jodie’s little formula means actually there are only 0.000004 planets in our galaxy with intelligent life.

0.0000004 planets with intelligent life in our galaxy. Kinda deflating.

And he just kept riffing. He showed us how we ALL need to watch Back to the Future again, and how we need to look closely at how Marty McFly’s time-travelling affects the name of ‘Twin Pines’ Mall. He gave us the basics behind The Matrix, and explained how the big, bad robots were actually wasting energy by feeding humans just to gain 100 watts per body. And he even showed us a clip of Dolph Lundgren (who’s actually a chemical engineer in his spare time) writing down Einstein’s Theory of Relativity in the movie The Expendables.

My nerd-o-meter: bursting with happy.

True story: Neil managed to pester James Cameron into changing the night sky in an upcoming re-release of Titanic

Most star systems in the universe are probably binary (or more); our single-star system is not as common

Neil once got felt up at an event by a middle-aged woman…who was actually a seamstress. She later shipped him a handmade (and perfectly fitted) vest with stars embroidered on it

I guess what I’m getting at is: Neil put on a damn good show. If you love science (or even just like it) you owe it to yourself to see him. Seriously. He gave us a good two and a half hours, and might’ve given more had he not been ushered offstage, presumably to fly to the next night’s venue. While it’s true I personally might’ve liked less layman’s science in favor of some harder, darker stuff, his presentation was perfect.

And let’s be honest; who among us hasn’t sat before a movie screen and said to ourselves, “Wait a second. That could never happen.” Right?

Now. Go science the shit out of something.

Author of A Door Never Dreamed Of, and borrower of much science

J Edward Neill is a surreal artist and author. He lives in a cavern in North GA, where the sun shines too much, but the bourbon is fantastic.
View all posts by grimwain →
Tagged  Astrophysics, Back to the Future, Breaking the Rules, Movie Science, The Martian.
Bookmark the permalink.