Once, the empire of Vhur was the world’s most powerful. But that was before the Lichy plague. Now, twenty years and millions of dead later, only a few cities remain. The survivors walk a fine line between life and the grave.
And come the Night of Knives, even these last few might perish.

Episode One is always free!! 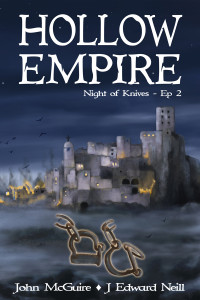 If you prefer the feel of cold, dead trees beneath your fingers, the complete paperback edition (Episodes 1-6) is here.

Author of sci-fi hit A Door Never Dreamed Of

And creator of the Coffee Table Philosophy series

J Edward Neill is a dark fantasy novelist. He lives in a man-cave in North GA, where the sun shines too much, but the wine is fantastic.
View all posts by grimwain →
Tagged  Books about the end of the world, Books about zombies, Friday the 13th sale, Post-apocalyptic books, Scary Books for adults.
Bookmark the permalink.