Love is a Battlefield

This article has nothing to do with books, art, movies, comics, or skulls. It’s not a quiz. It’s not philosophical. It’s not even this. I promise I’m not gonna try to sell you anything.

The cold hard facts are these: Dating is nothing like it once was. Nor will it ever be again. That’s not to say it was easy in the past. (It wasn’t.) But in the modern technological era, the challenges of connecting with another human go way beyond working up the courage to approach them. Approaching is now the easy part. It’s everything else that’s a minefield.

Used to be, as recently as the early 2000’s, Americans would date almost exclusively within their circle of friends. In other words: lack of access to a huge pool of people restricted dating options to a few hundred potential mates…at most. If you didn’t have a wide range of friends, didn’t go out much, or didn’t work at a large company with hundreds of employees, chances are your options were extremely limited.

Throw all of that out the window.

Today, dating options are nearly unlimited. In less than the span of a single generation, Americans have completely flipped the culture upside-down. Now, instead of a few hundred potential mates (if you were lucky) we singles have access to millions. Instead of happy hour or singles night at the club, we have all that and dozens of dating sites, ie; Match, Plenty of Fish, Zoosk, EHarmony, as well as the dreaded Tinder. Hell, even married people have it easier to cheat with creeptastic sites like Ashley Madison. In literally five minutes, one can make a profile, weed out millions of potentials with a few clicks, and set up a date. Add in Uber’s new black car service, and you, yes you, are only about ten minutes removed from an amazing night out.

…or an utterly mediocre one. 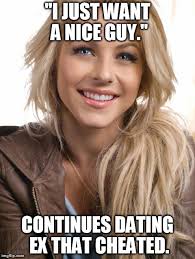 Enter: the dark side of complete dating freedom.

The obvious truth is that with the ease of finding new partners via huge available dating pools, daters have too…many…choices. If Guy A and Woman B meet via Match.com, hit it off well, and enjoy several steamy dates, that’s all well and good. Prior to 2000, this neat little couple might have willingly closed the door to other potentials and moved on into a serious, meaningful relationship. But in the modern era, what happens when Guy A observes some small fault in Woman B or when Woman B realizes Guy A just isn’t as tall as her usual crop? Way too often…it’s back to the drawing board. The modern dating culture allows it, so why not? Why not seek utter perfection? Why shouldn’t every woman have their 6’3″, chiseled-abs, wealthy, handsome, funny, fastidious, college-educated, well-cultured man? And why shouldn’t every guy have a level-headed, successful, highly intelligent supermodel? If love (or at least a three-night stand) lies only a few clicks away, why not?

Because there is no perfection.

A group of U.S. psychology professors collaborated, describing the faults of online dating, which was published in the journal Psychological Science in the Public Interest. Professors stated that the sites couldn’t predict whether a relationship would last just because two people had similar interests and personalities. According to Professor Eli Finkel, who worked on the report, “They do not [work].”

-Couples who meet online are more likely to break up-

Researchers from Stanford University and Michigan State University surveyed more than 4,000 people. They learned that breakups were far more common in couples who met online versus offline. They claim that the phenomenon holds true for both married and unmarried couples.

-81% of people lie about their height, weight, or age in their online dating profiles-

University of Wisconsin-Madison researchers weighed and measured subjects in addition to checking their driver’s licenses for their actual ages, and then looked at their subjects’ online dating profiles. Women tended to claim that they were 8.5 pounds lighter than they actually were. Men lied by less—only two pounds—but rounded up their height by a half inch more often. (mentalfloss.com – Merideth Danko)

Ultimately, the trend is unlikely to stop. Much like Google opened up a planet’s worth of previously difficult-to-find information, Amazon allowed travel-free shopping, and porn sites across the world eliminated any apparent need to talk birds and bees with any kid over the age of 8, so too does online dating change the game completely and forever. This is where we’re at now. Total. Dating. Freedom. Let’s be clear, it’s unfair to judge people using dating sites. I’ve tried them myself, several times, with varying levels of success. And yet, deep down in my heart, I came to understand that total freedom paired with the almost cruel reduction of people to photos and profile blurbs wasn’t necessarily the ticket to happiness. And so I stopped. Cold turkey.

Look, it’s true that the past was far from ideal. It’s not like dating in the 50’s, 80’s, and 90’s wasn’t clunky and unpredictable. But anymore, singles have wandered into a warzone. For every one couple the creepy EHarmony guys brags about bringing together, oceans of people are drowning in disappointment. The internet promises plenty. But how often does it really deliver? Because let’s face it, most of us don’t want to date endlessly or swim down rivers of one-night stands. Most of us probably don’t even want the statistical perfection online dating appears to offer. We just want to find someone cool. Someone who gets us. Someone who won’t leave after an awesome date only to start clicking through more profiles the moment they get home.

Use your intuition, not your impulse. 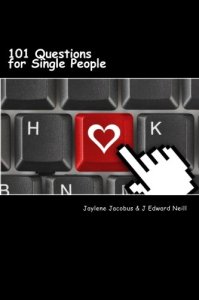 And author of this:

(This article is a mirror of my original Tessera Guild article.)

J Edward Neill is a surreal artist and author. He lives in a cavern in North GA, where the sun shines too much, but the bourbon is fantastic.
View all posts by grimwain →
Tagged  match.com, modern dating, sex and love, Skinder, Tinder.
Bookmark the permalink.