A few months ago, I got it in my head that I wanted to paint something huge. Something to be the centerpiece of an entire wall. Something that if people walked by, they’d have to stop and look.

And of course, it had to be dark. Because…well…you know.

I present to you: Ocean of Knives 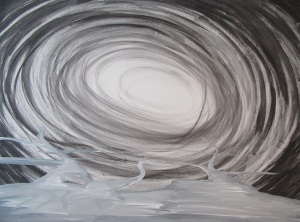 After securing a 36″ x 48″ white canvas, the damn thing sat in my closet for a solid two weeks while I stewed on what to paint. Would I use colors? Black & white? What would the subject matter be? And once I finally stacked the canvas up on my easel, it was precarious. Each brush stroke threatened to topple the easel and ruin everything. I had to be like Muhammad Ali: “Float like a butterfly, sting like a bee.” 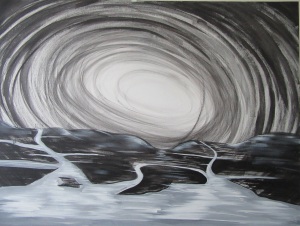 Surfaces started to take shape. Pale rivers flowed from the hills into a deathly ocean. Things were looking stark already. I loved it. And yet, while making wild ovals and grey hills was fun, it was by far the easiest part. Life was about to get harder. 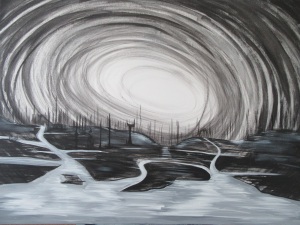 Ocean of Knives was meant to be a companion piece to my novel, Down the Dark Path. I began adding watercolor towers (knives) in the distance. Like snowflakes, each ‘knife’ had to be different. Some were forked, others straight as sin. Looks kinda barren in this pic. It wouldn’t stay that way for long. 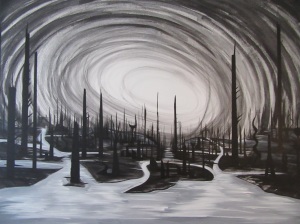 Now it came time to add the big towers. To make them straight, I carved out varying lengths of posterboard and used the pieces as straight-edges. For the wavy and irregular towers, I freehanded. Raise your hand if you’d like to live in one of these things. Am I the only one? Well ok then… 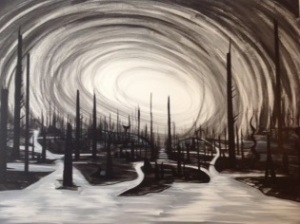 The quality of this pic sucks because I used my iPad. But I couldn’t leave it out. It shows the towers almost fully added. I still needed more watercolors for the faraway ones. And I needed street-level buildings to fill the city out. By this point, I’d spent about 12 hours on the painting. Whew. 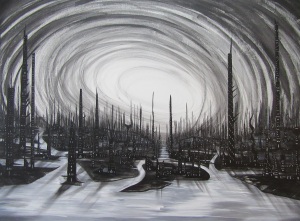 The finished painting – 18 hours in. See those little pale dots? They’re windows. I tried to count while adding them, but lost track at 2,000. Yes really. I figure there are about 3,000 little white windows in all. Tedious as hell, but utterly worth it. Also notice the deepened shadows the towers cast across the water. 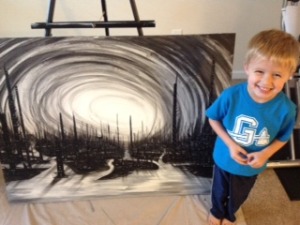 Just to show scale, here’s my 4yo, G Man, standing beside the painting. He’s a bit tall for his age, but even so. The canvas is about 4 times his size.

While painting this bad boy, I listened to soundtracks. A lot of Hans Zimmer, David Julyan, and Clint Mansell. Nice, brooding stuff, all of it.

J Edward Neill is a surreal artist and author. He lives in a cavern in North GA, where the sun shines too much, but the bourbon is fantastic.
View all posts by grimwain →
Tagged  Cityscapes, fantasy paintings, Shadow Art, The Emperor's Vision.
Bookmark the permalink.