History of the Ur

By grimwain Books!, Dark Moon Daughter, Darkness Between the Stars, Down the Dark Path, Nether Kingdom, Tyrants of the Dead 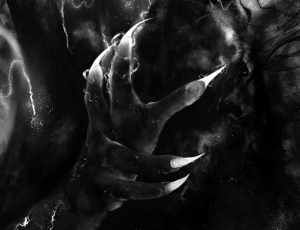 For those involved in the Tyrants of the Dead series (and those who will be) I present to you: The History of the Ur.

Every villain needs an origin story. Every monster needs a little light shined in its direction, so as to cast a darker shadow. The Ur are no different.

In the Tyrants series, what the Ur truly are is touched on only lightly. That said, the Ur are best described as demons. Not in the biblical or classical sense. They’ve no wings, pitchforks, or desire to possess your grandmother’s dolls. They’re diabolical interstellar shadows. They move from star to star, swallowing every planet in darkness, building black towers on every surface, and turning oceans to deathly broth. Once a planet is blanketed in shadow and every living thing smoked out, the Ur eject clouds of star-snuffing darkness from their towers. The darkness consumes the planet’s star, and the Ur move elsewhere.

Where do they come from?

From the void. From the realm before such things as time and consciousness. The Ur always have been, always will be. At peace before the universe began, their slumber was disturbed by the birth of trillions of stars. The Ur despise the invading light and all the creatures depending on it. They wish a return to the utter darkness that was, to the infinite emptiness before light and life arrived.

Can they be destroyed?

No. Not in the common sense of the word. Being neither alive nor made of any tangible substance, they cannot be killed. However they can be rendered powerless by sunlight, driven back by powerful sorcery, and imprisoned. Thus far, the only race to successfully resist the Ur longer than a few breaths is mankind.

What are their powers?

Before the coming of the stars, the Ur had no real power. But afterward, when the need arose to snuff the destroying starlight, they created a terrible form of magic. After encountering life (particularly mankind) they used their black magic to corrupt, enslave, and destroy. Because of the Ur, there is no ‘good’ magic. All magic come from the Ur, and thus all of it is meant for wicked ends.

They can take any form they wish, so long as that form is lightless and black. To terrify mankind, the Ur typically appear as shades. Ten feet tall, demonic claws and teeth, their eyes blazing with the light of annihilated stars, they are as fearsome a sight as is possible to imagine. A single Ur, given a cloudy, starless, pitch-black night, is capable of ending millions of lives.

Why did they build artifacts such as the Soul Orb and the Mountain of Malog?

Stretched thin throughout the void, the Ur needed dark engines to empower their magic and ensure their continued dominance. By capturing the fleeing souls of murdered life forms, they fueled their artifacts indefinitely, needing only a few hundred of their number to maintain dominion over each world. The Soul Orb is the worst of these creations, as it’s meant for living things to use while unknowingly destroying themselves.

Are there any ‘good’ Ur?

In the Tyrants series, no. However…a two-book prequel is in the works. And it may be revealed that not all the Ur are utterly irredeemable.

How can mankind ever hope to defeat the Ur?

They can’t. They can only hope to hold them off and survive for as many generations as possible. For even if one Ur is driven back or imprisoned, billions more roam the darkness between the stars…

I hope you enjoyed this snapshot of the bad guys. For more backstory and fun, check out the complete Tyrants of the Dead glossary.

The Ur appear in the 2015 novel, Nether Kingdom.

…the darkest of ALL dark fiction books.

J Edward Neill is a surreal artist and author. He lives in a cavern in North GA, where the sun shines too much, but the bourbon is fantastic.
View all posts by grimwain →
Tagged  Andelusia, Darkness, End of the World, Grimwain, Lords of the Night, Pitch Black, Star Eater, Ur.
Bookmark the permalink.