By grimwain Books!, Darkness Between the Stars, Sci Fi

Earth is no more.

Every human settlement in the galaxy has been destroyed.

On a planet far from home, Joff Armstrong counts the years until the Eaters of the Light return.

He knows it’s only a matter of time. He ended one of their worlds, but thousands more remain.

No one believes him.

No one understands the coming darkness.

And so, as humanity’s twilight nears, Joff will steal his way into the stars.

One man against legions of star-killing undead.

Searching for a way to stop the darkness between the stars.

Shadow of Forever is the sequel to Darkness Between the Stars.

The story is by me – J Edward Neill

The art is by Amanda Makepeace. 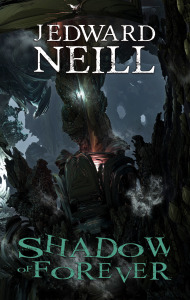 A preview is here.

Fall into the shadows tonight…

J Edward Neill is a surreal artist and author. He lives in a cavern in North GA, where the sun shines too much, but the bourbon is fantastic.
View all posts by grimwain →
Tagged  Books like Halo, Death Star, New Release, Sci fi series, Science Fiction Book, Vampires.
Bookmark the permalink.