* Disclaimer: This review is spoiler-lite. No plot specifics, deaths, easter eggs, or other direct moments from the movie will appear. However, themes and atmosphere will be discussed.

Before we begin, I have a confession.  I’m going to deliver a particularly unbiased, un-fanboyish review…because I can. You see, I’ve never been a big Star Wars guy. While the first movie intrigued me and The Empire Strikes Back fascinated me, the rest of the movies (except mayyyyybe the final Darth Maul fight in Phantom Menace) bored me to tears. It’s for this reason I feel I’m able to give an extra-fair review. Because while some went into the theater with high or low expectations, I was in the unique situation of going in with neutral expectations. Rogue One is just one more movie to me, not another in a canonical series.

And so it began. On a frigid December night, I wandered alone into a packed theater. Modest cheers erupted when the opening credits rolled, and then everyone fell into reverent silence.

…as is to be expected at a new Star Wars film.

Mads Mikkelsen, the excellent actor of Casino Royale fame, opens up the action as Galen Erso, a character I’d never heard of. There’s a certain stillness to his opening scenes, and right from the start it became apparent this wasn’t like the other Star Wars films. The music cues were slightly familiar, but also somewhat new (and almost jarring.) The conversations were less stiff, and the atmosphere more mature. After all these years of watching (and reading…and discussing) Star Wars, one of my complaints has always been that the Empire felt rather unimposing. The stormtroopers couldn’t hit anything, the bad guys overacted, and my dread was never really inspired.

But in Rogue One, I finally found the fear I’ve been looking for.

The Empire doesn’t pull any punches. The stormtroopers’ aim is 1,000% improved. The rebels find a few foes (other than Vader) worth being terrified of.

Early on, we’re introduced to Jyn Erso (played very capably by Felicity Jones) and Cassian Andor (played just as well by Diego Luna.) These aren’t the Lukes, Hans, and C3PO’s of the early, almost goofball Star Wars realm. These characters are deeper. They give us a taste of the true suffering endured under the Emperor’s Imperial reign. Their dialogue is a cut above the other Star Wars’ films, and while each scene pays loving homage to George Lucas’s vision, there’s no plagiarism here. There’s no ‘we’ve got to fit this cornball one-liner’ in. Sure, we see several familiar faces, but only one scene (I won’t even mention it) felt forced on the audience.

After the early scenes, the action starts moving fast. Things jump from planet to planet. You’ve got to be sharp to keep up with it.

We’re treated to an excellent performance of the reviled Grand Moff Tarkin (played superbly by Guy Henry.) His is a standout role, and deliciously evil. While the main antagonist is somewhat obnoxious, Tarkin is better.

We get a taste of some truly vicious space battles. No cornball Hayden Chistensen & Ewan McGregor banter while slaughtering TIE fighters. Just dudes and chicks fighting to the death with some awesome space hardware.

And we finally get a sidekick (he’s a droid) who’s actually funny. He helps us forget Jar-Jar Binks ever existed. Thanks especially for that, Gareth Edwards (the director.) 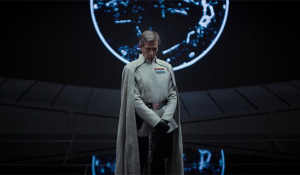 Our nemesis. He whines a bit, but works a solid amount of evil.

Now let’s talk atmosphere. Whereas previous Star Wars (and action films in general) force action scenes that tend to be juuuuust a bit too long, Rogue One gets it right. In the quiet spaces between the action, we get a little more than just a dusty desert scene or bars filled with aliens. There’s rain, beaches, canyons, and beauty. The music gets even better as the movie progresses, and in the latter half, the familiar John Williams score fires up in earnest. More importantly, we get to see the Death Star like never before. No more garbage chutes and incompetent stormtroopers here, ladies and gents. When the D Star rolls over the horizon, the effect is more powerful than all its previous viewings.

So let’s summarize. Does Rogue One have a good plot? Yes, it’s solid. Are the villains the most terrifying (and talented) we’ve seen in a Star Wars’ film? Yes, without a doubt. Do we get to glimpse our favorite historical characters without them being an obnoxious throw-in? Definitely. And is the ending good? Yes….the best I’ve ever seen out of Star Wars. I’ll be a little cryptic so as not to spoil it, but let’s just say fairy-tale endings are dull, and I wish more films had the guts to end like Rogue One.

So…did I love it? Maybe. I’m not sure yet. I will admit it had a few ‘oh come on…that’s unrealistic’ moments. And of course it has the typical Star Wars non-science science.

I really, really liked it. And I will go see it again.

And I haven’t been able to say that about a Star Wars movie since a long, long time ago in a galaxy far, far away.

If this it what Star Wars will bring the table in the future, count me in.

And get into some seriously deep sci-fi action right here.

J Edward Neill is a surreal artist and author. He lives in a cavern in North GA, where the sun shines too much, but the bourbon is fantastic.
View all posts by grimwain →
Tagged  Admiral Akbar, It's a trap, Movie Review, Rogue One, Star Wars Fan, The Rebellion.
Bookmark the permalink.