Eaters of the Light Sequel to Darkness Between the Stars AND Shadow of Forever.  The first chapter is free to read right here.

My name is Callista Lightbringer. Although I’m not human, I am humanity’s last hope. For a thousand years, I’ve warred against the star-killing Strigoi. I’ve destroyed billions. I’ve snuffed hundreds of their hollow, vampiric planets. It’s not enough. Alone, I must find the source of the Strigoi power. I must venture deeper into space than […]

The First Immortal * I walked the streets of a city I hadn’t seen in two-hundred years. And I felt thousands of people watching me. If Sumer’s crowds were passionate, it felt easy to forgive them. They knew me only from the stories they’d read, the outlandish tales their parents had told, and the exaggerations […]

At night, he watches the stars and dreams of flying between them. And when he sees them begin to disappear, he knows what will happen… The beginning of the end. Darkness Between the Stars Enter below for your chance to win one of 100 free copies of J Edward Neill’s sci-fi thriller. Goodreads Book Giveaway […]

Earth is no more. Every human settlement in the galaxy has been destroyed. …except one. On a planet far from home, Joff Armstrong counts the years until the Eaters of the Light return. He knows it’s only a matter of time. He ended one of their worlds, but thousands more remain. No one believes him. […]

There once was a boy who took to the stars… He sailed into the darkness…alone. …and waged war against the horrors he found. And now, Joff is back. * * * Now available – the sequel to Darkness Between the Stars. Shadow of Forever Shadow of Forever * Earth is no more. * * * * […]

A lonely artist. A dark castle. What could go wrong? 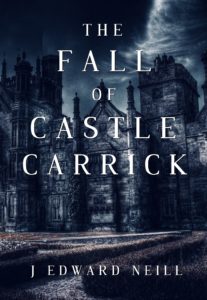